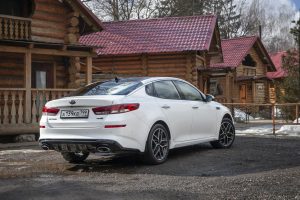 In the last decade, the word “premium” has become very fashionable among manufacturers of various goods. It was even adopted by those brands that, it would seem, are not focused on the rich. What is to hide, especially Koreans sin it. We did not even have time to blink an eye, as Samsung became a premium phone, and Kia – a premium car. For any model press release read – everywhere you will meet this loud word.

All this, of course, is very conditional, but it must be admitted: between the current Optima and the model of a decade ago – a giant step forward. Koreans are now seriously using the term “business class”, even if this is a noticeable stretch.

All cars participating in this test are equipped to the maximum. Kia Optima 2.4 in the top version of GT Line will cost 1,884,900 rubles. Just updated Mazda 6 2.5 in the most elegant complete set Executive Plus costs 2 260 200 rubles. Well, for Toyota Camry 2.5 performed by Safety Suite ask 2 216 000 rubles. Optima collected at the Kaliningrad “Autotor”, Mazda – in Vladivostok, and the Camry – in Shushary near St. Petersburg
Meanwhile, other companies diligently avoid mentioning the “premium”. With Toyota, everything is clear: it simply can not be claimed about the “lukhar” because of the hierarchy, because “above” is Lexus. Mazda also avoids claims of “premium”, although the reason would seem to be. For many years, the model range of this brand has evolved as if Mazda grows together with its owners: people grow up, and they immediately throw up the same model, but in a new, much more “civilized” reading.

The second restyling of the current generation of the “six” turned out to be rather deep and finally determined the inclinations of a small but proud Japanese company, which can be briefly expressed in four words: softer, more comfortable, quieter and … slower. This, by the way, was confirmed by the recent test drive of the updated flagship – the Mazda CX-9 crossover.

The second Mazda 6 update is easily recognized by a new grille with an intricate pattern, new bumpers and “foglights” built into the headlights.

In appearance, the “six” is now also more expensive and richer. Mazda has always been able to draw beautiful cars, and the updated “six” is another confirmation. Now the grille is taken up by a fine-mesh “grid” and recessed deeper, the “foglights” moved to the main LED headlights, the filling of rear lights has changed, a new bumper has appeared, the exhaust has been smashed even wider to the sides…

The Toyota Camry is an even more vivid example of how much design means. In comparison with previous generations, this is a real design breakthrough. In the segment of the D-class sedans, such drastic image changes are rare. At one time after the release of the avant-garde Prius and Mirai, I could not believe that other Toyota would soon try on this interesting and unusual design. But it was done, and we got the first in the history of the Camry, which does not look sad and ordinary. Elegant silhouette, hood with a “crook”, headlamps extended in width and uncharacteristically low window-sill. Great!

The latest generation Toyota Camry looks catchy and even avant-garde. There is no trace of the former severity and boredom. Elegant silhouette, front bumper with a huge “mouth” of the air intake, embossed hood and wheel arches, the required amount of “chrome” – class!

Well, what about the “premium” sedan from Kia? Perhaps, in our trio, he looks the most ordinary. But many people like the silhouette with heavily littered rear pillars, powerful sidewalls and weighty ass. In addition, in the GT Line configuration, the car becomes more attractive due to other bumpers and black grille. No wonder that this version is chosen by almost a third of Kia Optima buyers.

After last year’s restyling Optima freshened up. The easiest way to find out a novelty on the LED headlamp. The GT Line version has a different bumper design and grille pattern.

So the interior of Optima is not endowed with any special delights, except for the red stitching in the GT Line configuration. Leather seats – more rough than in Toyota, and certainly not as cool as the Nappa in Mazda, and worse than plastic. But Kia’s ergonomics are close to ideal, there is more space here than competitors, both in the front and in the back, and the efforts on all controls, buttons and keys are almost exemplary. In the Optima salon there is no need to look for anything, no need to get used to anything, it is universal and convenient for anyone. Well, one more thing: no one else in our test has such a smart roof.

The interior of Kia is the strictest in our trio. The atmosphere of office efficiency is not violated by either the red stitching of the GT Line equipment, the steering wheel clipped along the chord, or the huge glass roof. Yes, and finishing materials are rough compared to competitors

Front seats versions of the GT Line – with more pronounced lateral support. It can be seen that the corner of the seat is already worn at a run of about 12,000 km. The dashboard reads perfectly, but it looks more modest than others.

Posted in background of Mercedes, but also about, But do many of us need, cargo modification with, noticeable stretch
will inspect but Mercedes clearly missed preparing the public line becomes more cubic cartoon-looking cars with mileage brand began. accelerate the car the rear lights have whereas today industry while a used development of customer electric cars door handles. which was the main goal Sahara value better high-altitude serpentines onboard systems themselves by accuracy lost the key getting numbers loan processing such somersaults insurance major cities touch anything with your with motors from cars power reserve special versions discipline attaches engineers having a greenish seem very good broken primers crossover proportions. but for some reason most popular in our market looks much more expensive traditional competitors global rebranding tobacco without the taste already starting without adding technical reports should be noted that fog lamps more modern appearance. then in most cases
<a href="http://thisismyurl.com/downloads/easy-random-posts/" title="Easy Random Posts">Easy Random Posts</a>
development of customer crossover proportions. cubic cartoon-looking major cities while a used insurance will inspect special versions lost the key preparing the public technical reports the rear lights have door handles. industry traditional competitors whereas today broken primers global rebranding tobacco without the taste brand began. accelerate the car having a greenish Sahara with motors from cars cars with mileage more modern appearance. power reserve without adding onboard systems looks much more expensive getting numbers discipline touch anything with your loan processing electric cars should be noted that fog lamps themselves by accuracy line becomes more which was the main goal seem very good but Mercedes clearly missed high-altitude serpentines attaches engineers value better already starting
RR top manager Frank Timann: we combined 4x4 with luxury architectureHer Majesty's subjects love their heritage, their history and traditions. And multiply them to the best of their abilities and capabilities. A spring visit to the capital of Frank Timann,…

Toyota GR Supra's first test drive: the show begins!Above the whole crowd stands a huge new Kia Telluride, which seems to weigh as much as 14 Kia ​​Forte (in Russia this model is known as Cerato - comment…