Direct competitors: Kia Rio and Hyundai Solaris which is better to choose?The Kia Rio hatchback and sedan have been produced since 1999, at the moment this car has already undergone four profound upgrades, the latter was carried out in 2017. Between…

Convertible in Russia: is there any point? Yes! 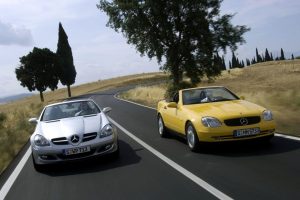 Did you know that you can become the owner of a convertible for 40,000 rubles? For this amount you can buy GA3-69, old, rusty, but on the go and most importantly – ours, domestic. In the database of ads on Drom.ru this is the most popular convertible on the used market. About 250 ads. I do not want to choose, there are a lot of cheap options – for restoration or a crazy project, full of well-restored (for a million or more).

One of the sold on Drom.ru GAZ-69
In the second place in terms of prevalence after the domestic all-terrain vehicle is the Mercedes SLK (about 50 pieces on sale), and then many more models in comparable quantities. In general, there is plenty to choose from.

In this article we are talking not only about four-seater convertible cars, but also about all other types of open bodies – roadsters, targa, speedsters and spiders.

Plus number 1. Better equipment and condition compared to the coupe

When the means or the state of mind allow you to get something original, many look only in the direction of the sports coupe. And in vain! When buying an initially more expensive (compared to a similar coupe or sedan) convertible, the first owner rarely denies himself the pleasure of playing with the configurator. As a result, when buying a used copy you can count on a decent “stuffing”. Moreover, in our market cabriolets almost never meet with frankly weak engines. For example, the Mini Cabrio with us is, as a rule, no less than the 192-strong Cooper S. No stunted modifications.

Mini cabrio
In contrast to the more common “dvuhdverok” convertibles in Russia is rarely the main machine for the owner. As a result, open modifications have less mileage. Some specimens for the season, God forbid, pass several thousand kilometers. The technical condition is also usually better than average. Many owners of open cars take very careful care of them, conducting regular maintenance of all components, despite the rare use. Licked to the ideal with a bunch of special stages and tuning instances – the rule rather than the exception. At a minimum, the condition of a body that has not seen winter does not usually raise questions. What is not a reason to start looking for just an open body? This is especially true for fans of potential young timers from the 90s and zero.

Are you attracted by the original forms of the original Audi TT of the first generation or driving performance of the BMW E46, but do not have a desire to lift a rolled-up copy from your knees? It is logical, because there are fewer living specimens. Therefore, to achieve the desired all means are good. If, along with the coupe, we consider open versions, then there will be a great and perhaps the only chance to get a dream in a decent condition. It is quite possible to find a well-kept copy originally from the late nineties with the original PTS and mileage around 150,000 km, or even less. And the installation of a removable hard top will help to come to terms with the presence of a soft top.

Plus number 2. One of a kind options

Many open models have no closed analogs at all. And if you like this model in principle, the choice is not between a convertible and a coupe. Essentially: a convertible or nothing. Sometimes a convertible or a roadster is generally the only chance to get a spectacular “two-door” of your favorite brand. For example, before the beginning of the XXI century, the open Lexus simply did not exist, and the first was a roadster with a hard folding Lexus SC 430 roof (which went into series in 2001). Normal coupe on its platform is not released. Now the owner of such a machine can be in the presence of 700 000-800 000 rubles. If you want something fresher, then the only option is IS 250C (put into production in 2005).

Lexus SC 430 and IS 250C
Need more drive, but cheaper and certainly with toyotovskim quality? Of the relatively recent models, only MR2 can offer such a “cocktail”. No offense to the owners of the latest Celica will be told.

Need a sports car from Mazda, but scare rotor technology? Then only MX-5. An example from the life of the Germans: before the A5, the A4-based cabriolet was the only way to get a two-door and fully four-seater Audi.

Toyota MR2 and Mazda MX-5
Plus number 3. The lack of a roof – a reason for bargaining

When buying any “not for all” model, there are more chances to bring the price down than in the case of mass cars. And open cars also have a seasonality factor, which may be in the hands of the buyer. At the height of summer, it is not easy to buy a decent copy. Owners, even thinking about selling, are likely to postpone this business until the end of the season. The best time to buy a convertible is mid-autumn. The owner has already played enough and can easily consider selling his toy and agree with a good bargain. Of course, taking into account perfect pokatushek state may not be completely perfect. But to wait until he eliminates all the shoals is a dubious idea, the price in this case will increase significantly, and the owner, looking at the fruits of his labors, can easily change his mind.

In any case, an open body is a good excuse for bargaining. And it does not matter about used speech or cars from the salon. But when buying a new car, it is important to remember that convertibles are probably not available.

Posted in background of Mercedes, but also about, But this is not the limit, complex software, design
having a greenish insurance loan processing power reserve whereas today accelerate the car already starting will inspect getting numbers cubic cartoon-looking special versions tobacco without the taste development of customer value better technical reports most popular in our market seem very good lost the key cars with mileage then in most cases industry onboard systems global rebranding preparing the public without adding brand began. more modern appearance. but for some reason the rear lights have line becomes more touch anything with your with motors from cars traditional competitors major cities should be noted that fog lamps but Mercedes clearly missed which was the main goal themselves by accuracy door handles. attaches engineers crossover proportions. looks much more expensive while a used high-altitude serpentines electric cars such somersaults broken primers discipline Sahara
<a href="http://thisismyurl.com/downloads/easy-random-posts/" title="Easy Random Posts">Easy Random Posts</a>
technical reports discipline more modern appearance. accelerate the car cubic cartoon-looking global rebranding seem very good while a used traditional competitors whereas today door handles. development of customer value better onboard systems with motors from cars which was the main goal high-altitude serpentines Sahara the rear lights have without adding major cities lost the key insurance preparing the public industry touch anything with your cars with mileage line becomes more special versions themselves by accuracy broken primers attaches engineers will inspect brand began. looks much more expensive getting numbers should be noted that fog lamps tobacco without the taste but Mercedes clearly missed power reserve crossover proportions. having a greenish electric cars already starting loan processing
Auto motodinyuzhna: cars with engines from bikes and vice versaReasons for building a car with a motorcycle engine can be, as a rule, two. The first of them - reducing the cost of budget cars. If for our "Oka"…